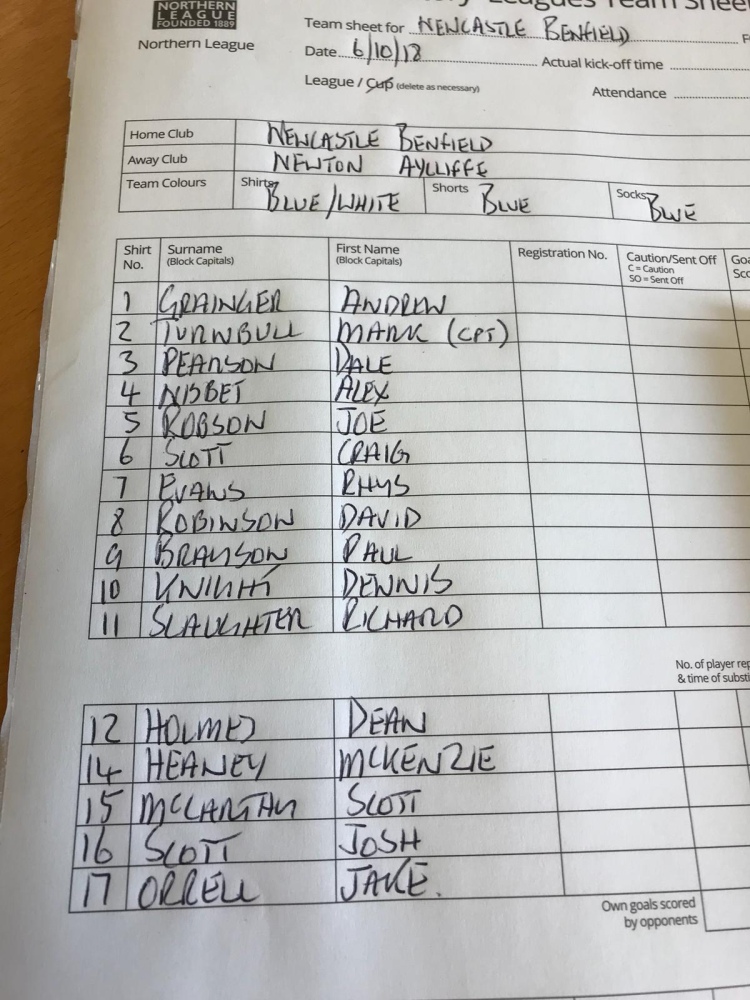 Following the midweek departure of manager Mark Convery, Newcastle Benfield were under the direction of striker Paul Brayson. The veteran marksman’s first decision was to change the formation to a 3-5-2, with Mark Turnbull, Craig Scott and Joe Robson at the back, Rhys Evans and Dale Pearson as wing backs, a central midfield trio of Alex Nisbet, Richy Slaughter and David Robinson,

with Brayson and Dennis Knight up top. In goal, as ever, was Andrew Grainger, whose sole involvement in the game was to catch a rebounded effort off the top of the bar by Aycliffe’s substitute Marc Costello in the 77th minute. This probably gives you an indication as to the dominance enjoyed by a rejuvenated home side. 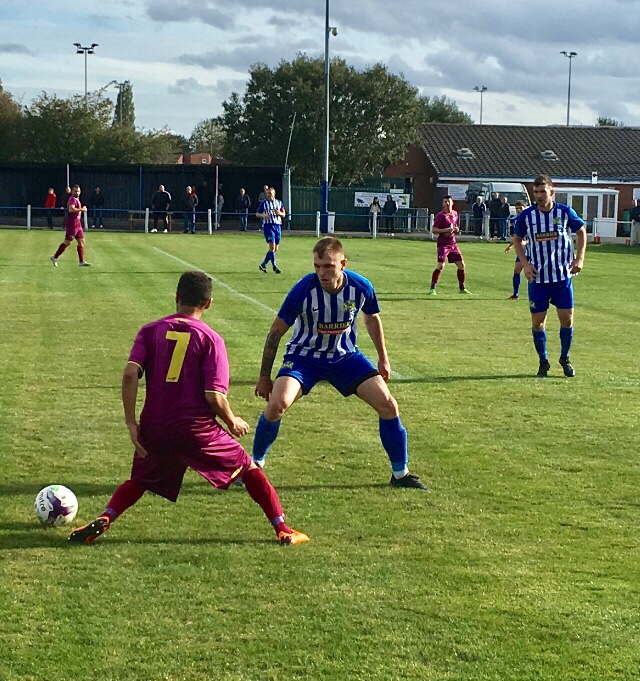 Like so many games this season, Benfield began like an express train. In the first minute, Brayson was set free by Dale Pearson. He stepped round the despairing lunge of keeper Daniel Scott but ended up slightly wide of the target and could only find the side netting. After 4 minutes, Scott used his legs to stop another Brayson effort, but eventually the home side took the lead on 10 minutes. Rhys Evans played a ball into Brayson’s feet in the area and, with his back to goal, he was brought down by a combination of keeper and defender, resulting in a spot kick. Brayson, limping slightly, passed the honour to Dennis Knight who confidently buried the ball in the bottom corner.

Less than 3 minutes later, it was 2-0. Lurking at the back post, Dennis Knight received the ball from a corner and fired in a thunderous effort that struck the underside of the bar, falling perfectly for Joe Robson to nod in for his first league goal for the club. Finally, Benfield had managed to turn early supremacy into tangible rewards with a pair of goals.

In this opening period, the crowd were energised by seeing the old confidence and swagger returning to the Lions’ play as confidence and self-belief oozed through their veins. 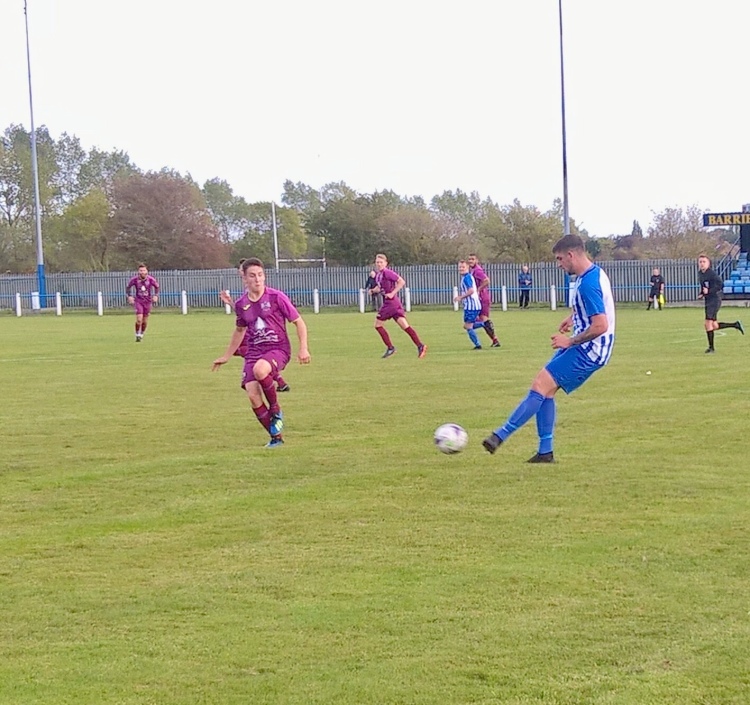 Dennis twice more almost scored before the 20-minute mark; a low drive from distance was fumbled round the post by Scott and a gorgeous move involving Evans, Brayson and Slaughter ended with the bearded wonder firing just wide.

The third goal was always coming, and it duly arrived on 33 minutes, when Paul Brayson crashed in a free kick from outside the box, that left keeper Scott clawing fresh air. It was almost 4 from a similar position minutes later, when Evans set up Brayson, only to see Scott get behind the ball on this occasion. The score at half time was a less than flattering 3-0 to Benfield and the good times were on their way back to Sam Smith’s Park. The fact the final score was 3-0 should not indicate that the second half was a kind of After the Lord Mayor’s Show anti-climax. Although the half began quietly, Benfield ramped up the pressure after the hour and if a spot kick had been awarded after Dale Pearson was barged over in the box, the final margin of victory could well have been extended.

As it was, Brayson ensured the game was successfully managed to a conclusion, removing himself from the firing line and allowing McKenzie Heaney to showcase his stunning array of flicks and skills in an eye-catching late cameo. If this is the kind of trickery he is capable of on a regular basis, then his return to full fitness cannot come soon enough. 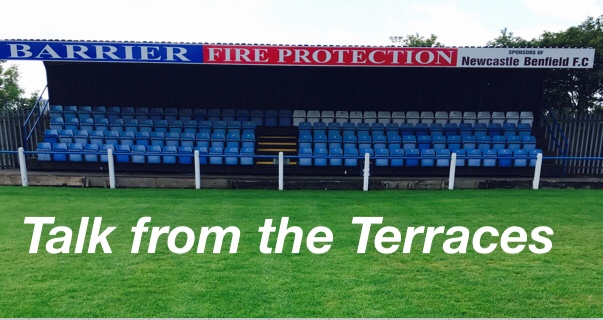 Having begun watching Newcastle Benfield full time at the start of the season (attended a number of games last season on a more casual basis), people could quite possibly start questioning whether I was an unlucky mascot, after what can only be described as a slow start to the season.

After clear signs of improvement over the 3 previous games, there was confidence that a much needed home victory could be secured on Saturday against a mid table Newton Aycliffe. Although when your side doesn’t win, it makes you miserable for a few days, I have still retained 100% excitement on a match day and have not been genuinely concerned I was an unlucky omen.

Having only been a face around the football club for a couple of months, the welcome I have received has simply been brilliant and therefore a couple of pre match pints offers a great opportunity to develop friendships further.

As things turned out, this was the Lions most dominant and straightforward victory of the season. It was clear from early on that our visitors lacked any real leaders and certainly this was not one of their best recent days from a footballing perspective, with no real cutting edge in the final third especially apparent.

After a Dennis Knight penalty (great to see his efforts now being rewarded with goals), a Joe Robson header (what a signing) and a customary goal from Paul Brayson before we had reached 35 minutes, the outcome was never going to be in any doubt. Unfortunately I missed 2 goals due to “bladder” issues and there were to be no further goals beyond this blistering first 35 minutes as Benfield coasted to a valuable and well deserved 3 points. Thank you to Luke for getting the highlights up quickly so I could catch up before the weekend was out!

After many years in non- league Football, I am really enjoying being a part of such a great club and can’t remember having this level of enthusiasm for such a long time. It is great to see others share this enthusiasm with the impressive Sam Smiths Sports ground regularly seeing new works completed behind the scenes.

With all areas of the club flourishing (including junior and reserve sections), there really hasn’t been a better time to support your local non league club or get involved in another way – lets hope the people of NE6 (and beyond) realise what they have on their door step.

Cheap entry, reasonable priced beer, a varied choice in the canteen for the kids and a good standard of Football, what more could you ask for?

Saturday coming (non league day), you have the opportunity of a trip to the seaside as the team head to Whitley Bay…..see you there!