Newcastle  Benfield made the trip down the A19 to play Stockton Town who recently had been promoted to the first division.

Due to having been ill during the week top goalscorer Paul Brayson didn’t start, he was hoping that he would not be required to play although he was named as a substitute.

The visitors started off brightly on the newly laid 4g pitch

gave Scott McCarthy a good shooting chance which he hit over the bar. 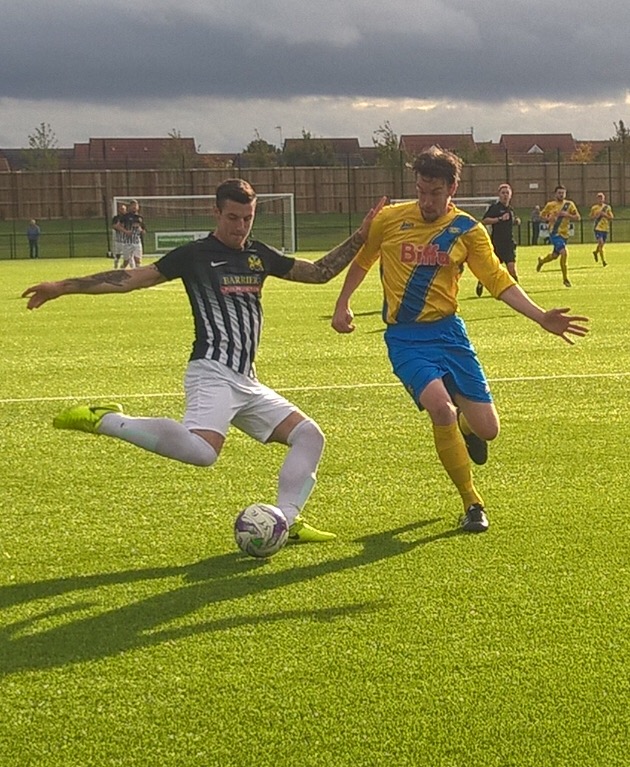 Seven minutes later and it was Stockton’s chance to get a goal,a dangerous cross from Chris Stockton saw Benfield keeper Andrew Grainger flap at the ball dropping it at the feet of Kevin Hayes who missed a good chance hitting the ball over the bar.

Newcastle Benfield had another chance to open the scoring in the 17th minute,a breakaway from Scott McCarthy saw him advance forward into another good shooting opportunity but his weak effort went wide of the goal. All the shooting chances for Benfield were falling to McCarthy and again he was unsuccessful when a fine through ball from Olly Leadham gave him a shooting chance but the Stockton keeper Michael Arthur was up to the task making a good save with his legs. 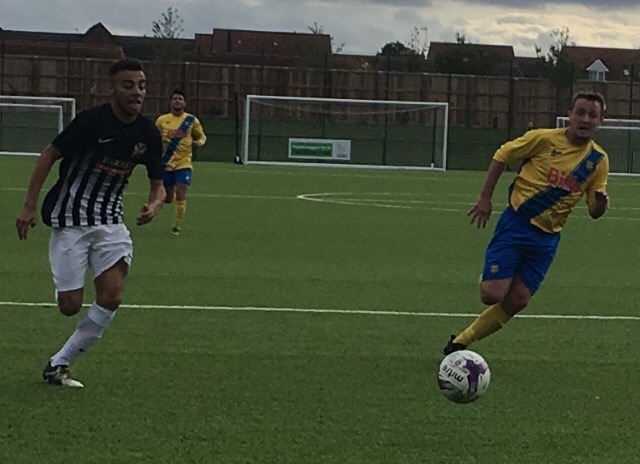 A goal had to come and it did come in the 22nd minute, KEVIN HAYES took possession thirty yards from the  Benfield goal, he advanced forward to hit a screamer of a left foot shot which flew past Grainger high into the net making the score 1-0 to Stockton Town.

Two minutes later and Benfield went close to getting an equaliser when a free kick  from 35yards was taken by James Novak but it just cleared the Stockton cross bar.

Goalscorer Kevin Hayes was proving to be a thorn in the Benfield side and with five minutes of the half to go almost doubled his teams total. Receiving the ball out on the right wing he cut in beating Benfield defender Marc Dummet before hitting a low drive which caused Grainger in the Benfield goal some concern but he managed to save with his feet leaving the score at 1-0 to Stockton which it was at half time.

Stockton came out for the second half in a rampant manner,and within 22 minutes had scored their fourth goal;they nearly scored within three minutes of the restart when Chris Stockton hit a low left foot drive which was well saved by the Newcastle Benfield custodion. 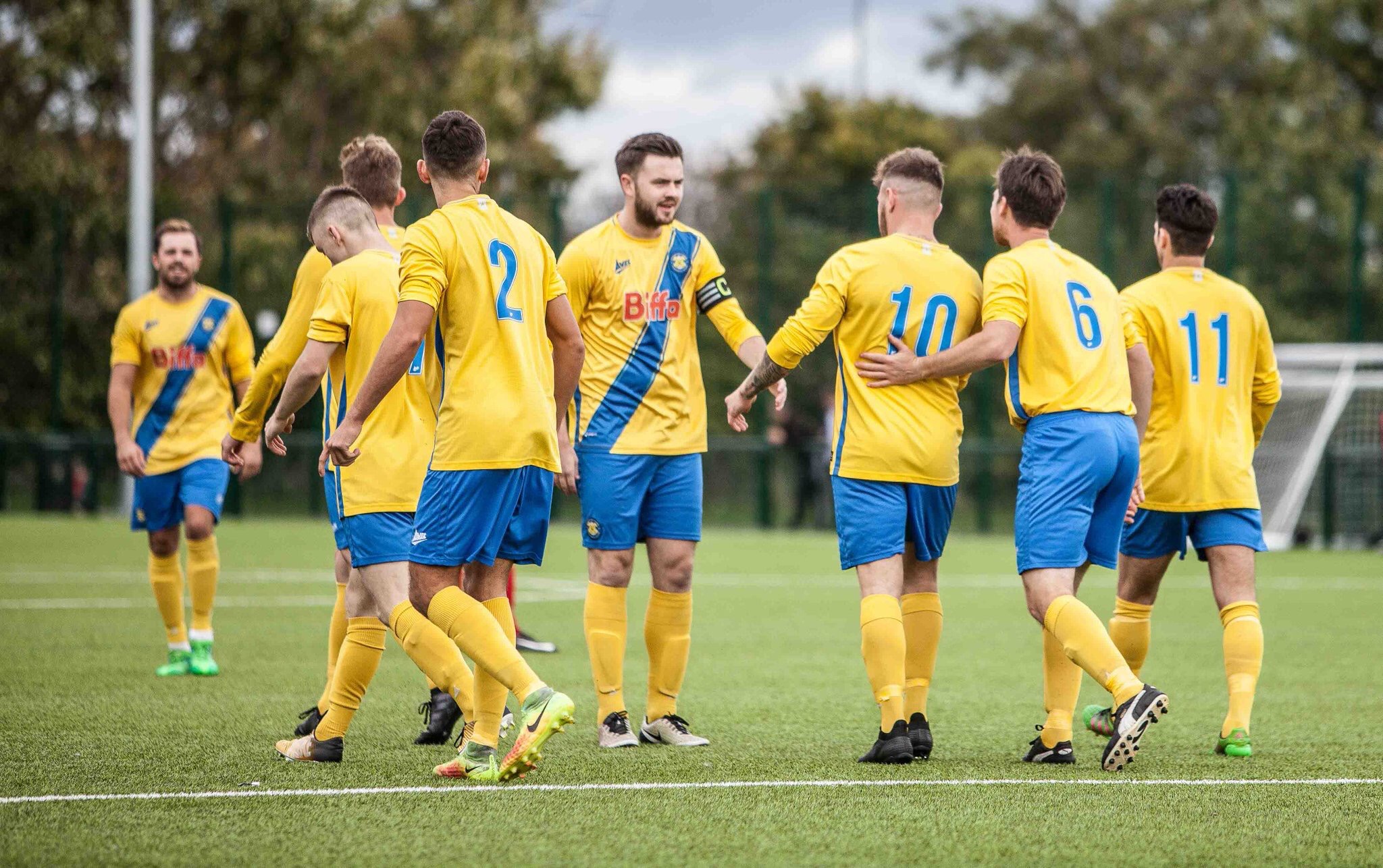 CHRIS STOCKTON didn’t have to wait long to eventually get on the score sheet when in the 52nd minute he was first to react when a shot by Jamie Poole was deflected to him and he made no mistake in making the score 2-0 to Stockton.

It was  three, seven minutes later when chest control and a back heel by Fred Woodhouse found team mate SONNI COLEMAN who placed the ball into the net leaving the score at 3-0 to Stockton Town. With 67 minutes having elapsed Stockton got their fourth goal, it came from the penalty spot after a foul by Marc Dummett on Kevin Hayes, up stepped JAMIE POOLE to firmly hit the ball into the roof of the net making the score 4-0 to Stockton Town. 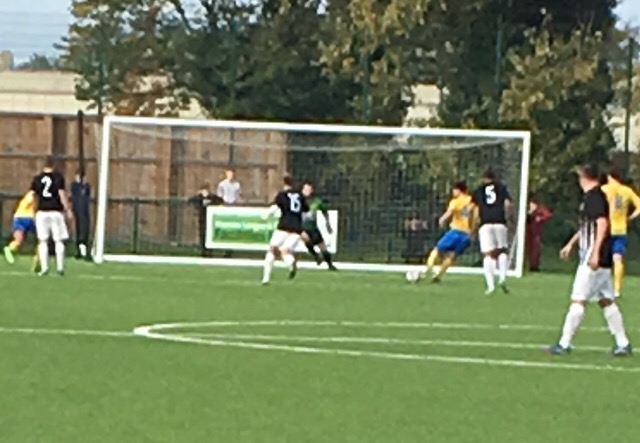 It could have and should have been five goals in the 70th minute,a fine pass from Sonni Coleman found team mate Fred Woodhouse who put his shot wide of the mark when he  should have scored. A minute later and another chance fell to Scott McCarthy when the ball was only half cleared the the edge of the penalty area, although he struck the  ball quite well Stockton keeper Michael Arthur was up to the task saving the ball for a corner. Newcastle Benfield were dealt a blow in the 75th minute when substitute Steve Bowey who had only been on the field 6/7 minutes was sent off for disputing a penalty claim for a hand ball.

although another goal could have been conceded, a through ball was headed clear by Benfield keeper Andrew Grainger who had come out of his goal area to clear a Matthew Garbutt pass,the ball went to Kevin Hayes who saw his shot eventually tipped over the bar by the Benfield keeper who had just managed to get back into his goal area.

The final attack of the half came in the 89th minute when a long pass from Mark Turnbull found Paul Brayson who after controlling the ball hit a left foot shot comfortably saved by Michael Arthur in the Stockton goal leaving the score 4-0 to Stockton.