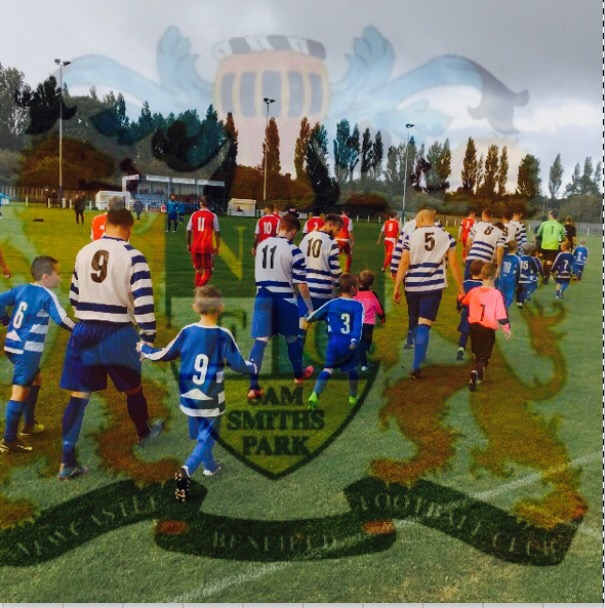 The long and winding road to Wembley had already seen Newcastle Benfield progress to their fourth match in the world famous competition. Victories over fellow Northern League opponents West Allotment and Whitley Bay were surpassed with an away win against Goole Town from the league above. This match was against Ashton United who are a team two levels above, so a very difficult game was anticipated. You could see in the early stages that the visitors were a very comfortable on the ball and it looked like Newcastle Benfield were in for a very tough 90 minutes.

Thirteen minutes had been played with the visitors having most of the possession but without causing any great threat to the Benfield goal. That changed however in the 13th minute, Ashton’s Nicky Platt produced a terrific cross into the Benfield penalty area, to allow team mate Matthew Chadwick to plant a firm header destined for the top corner of the Benfield goal, only for Andrew Grainger to bring off a fantastic save tipping the ball over for a corner. It was Grainger again to the rescue in the 19th minute when a lapse of concentration allowed Nicky Platt to play a quick free kick into Chadwick, with his well struck near post shot again pushed for a corner.

Newcastle Benfield’s first real threat on the Ashton goal came in the 23rd minute; Dylan McEvoy played a long pass to Paul Brayson, controlling the ball well he hit a firm shot well saved by Ashley Frith in the Ashton goal for a corner.

The visitors were still well on top moving the ball about keeping possession but were not really threatening the home team goal and were done like a kipper in the 34th minute when Benfield got the opening goal. Paul Brayson laid the ball off to Alex Nisbet,

who in turn played a through ball to DYLAN McEVOY

Ashley Frith and plant a left foot shot into the Ashton net to the delight of his team mates and the home crowd making it 1-0 to Benfield.

Two minutes later and a dangerous cross into the Benfield penalty area caused concern before being cleared to safety by Matty Grieve.

That was the end of any attacking threat to either team and the half finished with Newcastle Benfield leading 1-0.

who was celebrating his 40th birthday almost doubled Benfield’s tally; a long pass out of defence by Lewis Scorgie saw the Benfield striker control the ball and turn a defender to hit a fierce shot crashing back off the Ashton cross bar and away to safety.

It didn’t take BRASSY long however to get a second goal for Newcastle Benfield, a long pass from James Novak found the maestro who after controlling the ball feigned to hit a right foot shot fooling the defender, this then gave him space to hit a left foot shot past the Ashton keeper making the score 2-0 to Newcastle Benfield.

Benfield winger Scott McCarthy was having one of those days when not everything he tried was coming off, but in the 68th minute he eventually got the best of Ashton’s full back Mark Lees; deciding to cut in he then shot at goal with two unmarked team mates waiting for him pull the ball back to them.

A minute later good defending from James Novak saw him head clear a dangerous cross from Ashton’s Matty Chadwick. Half an hour of the second half had passed with Ashton starting to get a little more direct in their play and they could have pulled a goal back, a dangerous corner saw Grainger flap at the ball causing a scramble in the Benfield penalty area. The ball fell into the stride of Dan Pilkington who hit the ball high over the home goal when he should have at least hit the target.

It was Benfield’s chance to cause problems in the 77th minute when quick thinking by Dylan McEvoy saw him play a quick short corner to Paul Brayson; advancing forward he hit a strong shot which was well defended by Josh Granite who headed the ball clear away to safety.

Ashton’s Matty Chadwick who had been a hand full all game could have done better in the 81st minute, he received the ball out on the right wing before cutting in but good  defending pushed him onto his weaker left foot with his shot not coursing any concern for Andrew Grainger in the Benfield goal.

What could have been the turning point of the game came in the 82nd minute; a rash tackle by Alex Nisbet who had been doing well in midfield, saw him given a straight red  card by referee Craig Dean for a foul in the centre circle. Ashton with the extra man started to put the ball early into the Benfield area and it came off in the 86th minute when they pulled a goal back, substitute OSCAR DURNIN floated a cross in from the left wing, it was missed by everyone ending up in the Benfield net making the score 2-1 to Newcastle Benfield.

Were the home team going to hang on for the next few minutes? This was the question being asked by the home supporters as Benfield are  well known for conceding in the final minutes. They had a shock right on the 90 minute mark when a pass from Nicky Platt found Matty Chadwick who flashed a low ball across the Benfield six yard box and away to safety. The referee then added five extra minutes on but Newcastle Benfield managed to hang onto their lead over their higher ranked opponents winning 2-1.

Man of the Match: Dylan McEvoy

Special thanks to our Lucky Mascots from

Benfield Juniors let’s hope your on our team sheet soon.

Fantastic day for Newcastle Benfield club and a special day for Paul Brayson who scored the winner on his 40th Birthday. 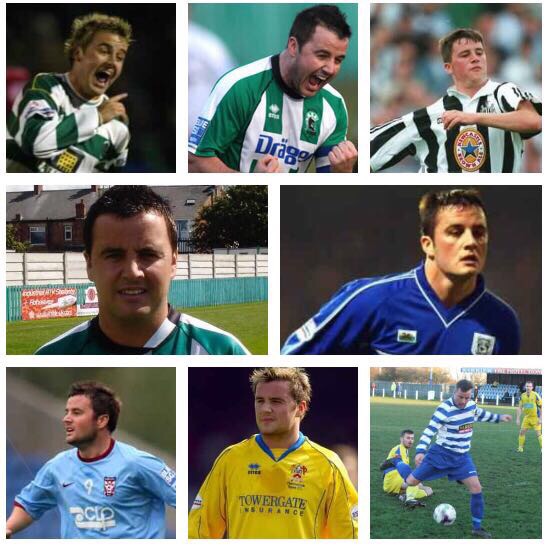 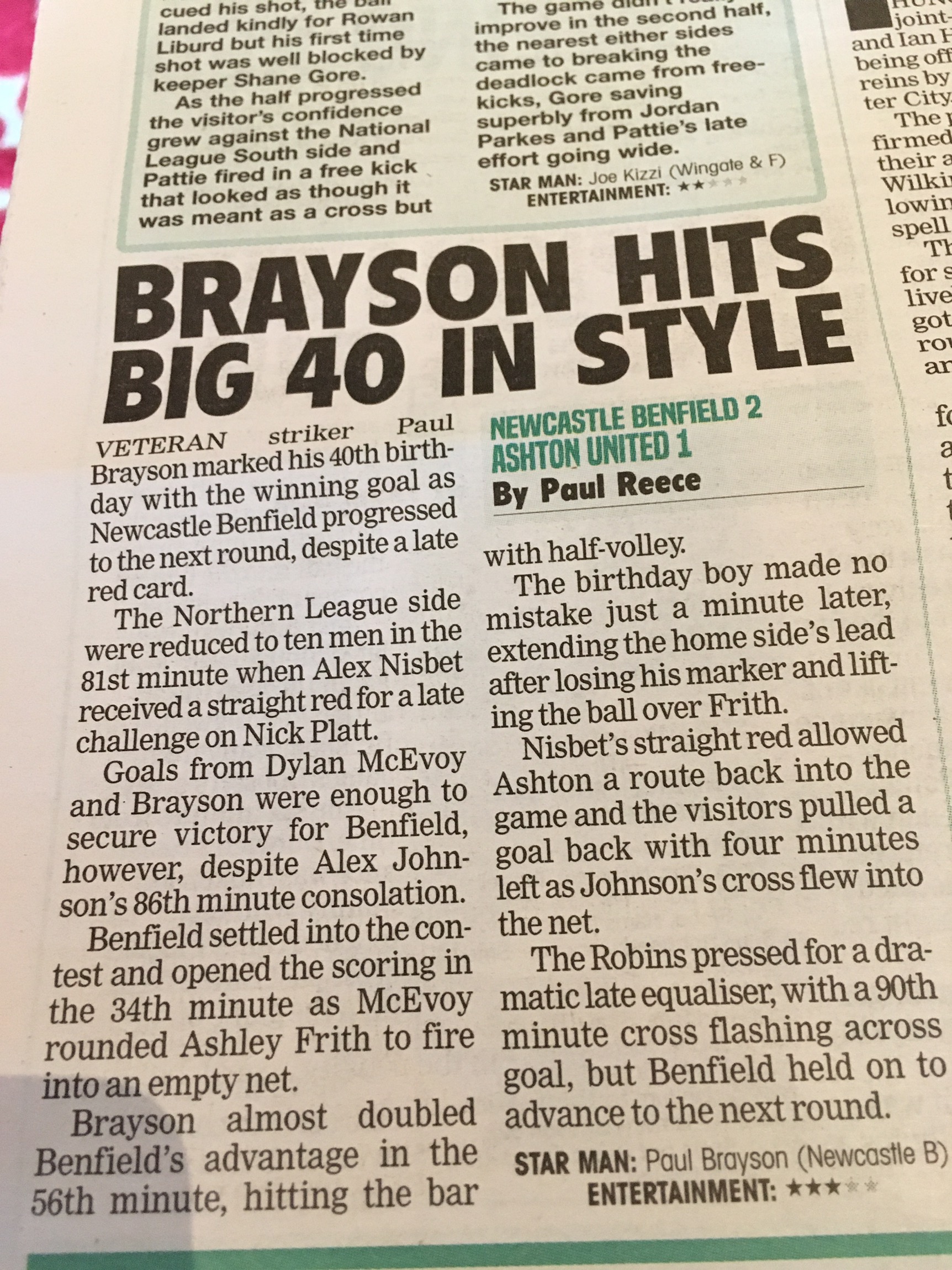 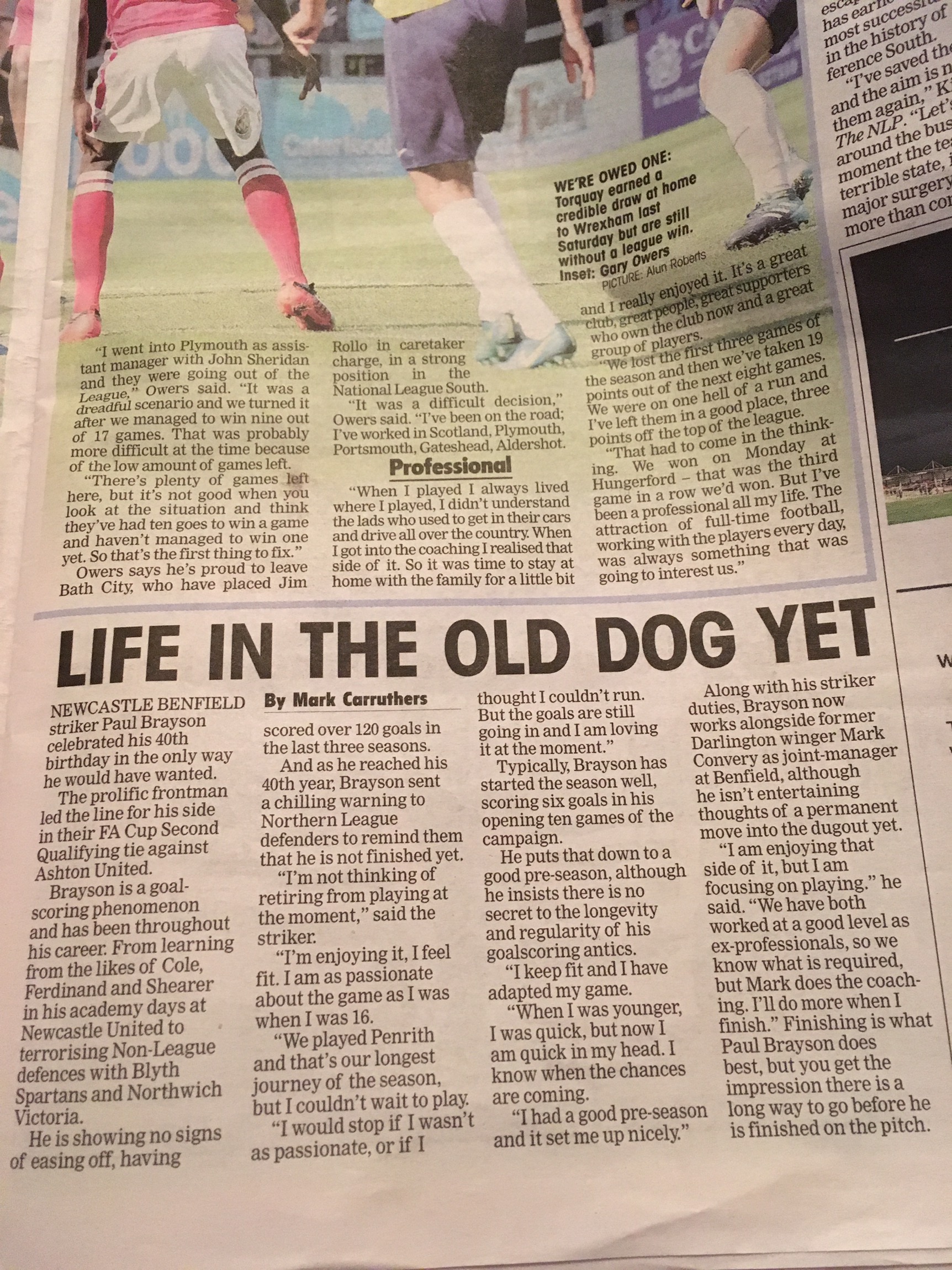 Thanks to Paul Reece,

Mark Carruthers and Gary Oliver for their coverage in social media/non league paper.